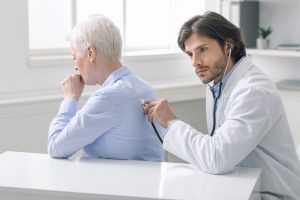 The respiratory tract starts at the nose and mouth then continues through the larynx (throat), trachea (wind pipe) and then ends at the two bronchi systems right and left lungs. There are 23 more branches of these two main bronchi's that branch off into small air pipes called bronchioles and end in small air bubbles called alveoli which help the gas change within the respiration.

The Chest Diseases Department is the department involved in the diagnosis and treatment of diseases within the lungs or the pleura membrane. These diseases either ruin the lung functions by effecting the windpipe and cause symptoms such as difficulty in breathing, coughing, phlegm or effect the lung areas excluding the windpipe and cause symptoms such as; side pain, chest, back and shoulder pain, blood from the mouth, weight loss, tiredness, loss of appetite, sweating during the night and fever.

Diseases that are diagnosed and treated with the most modern methods at the Chest Diseases Department at our hospital:

Test Conducted at the Chest Diseases Department of our Hospital:

Smoking is the number one preventable in public health threat. It causes respiratory diseases which directly affects the lungs (Occlusive lung diseases such as chronic bronchitis, emphysema) and it causes lung cancer which is the number one cause of death caused by lung diseases. Children’s exposure to cigarette smokes can cause lower respiratory diseases (pneumonitis, bronchitis) as well as aid the development of asthma. Preventing the disease from forming, preventative medicine is preferred to treating the disease.  With this aim, our hospital raises awareness of the harms of smoking and the diseases that it causes, support for quitting smoking is provided at our ‘Stop Smoking Polyclinic’ with the help of the Chest Diseases, Psychiatry and Dietician Departments.

Respiratory treatment with ‘Non-invasive Mechanic Ventilation Equipment’ can be used on patients in intensive care or in the inpatient ward, radiologic imaging is being used efficiently by following the latest technological facilities closely.